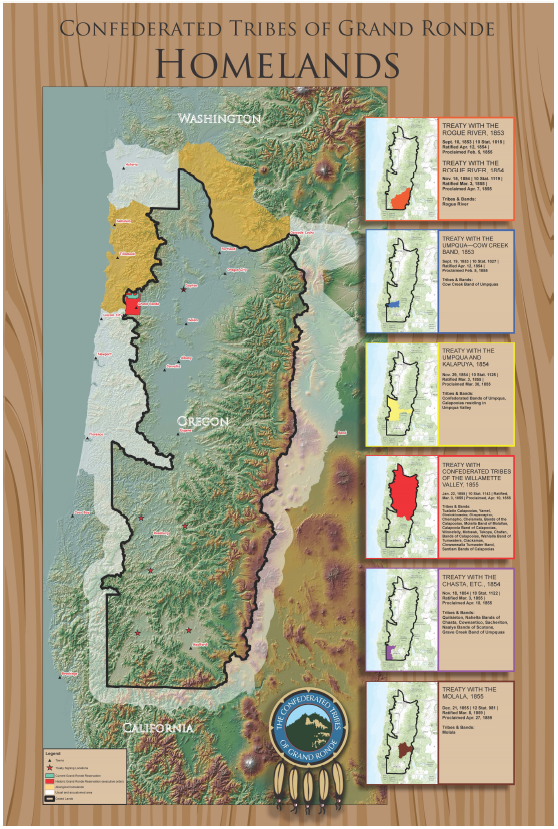 The Confederated Tribes of the Grand Ronde Community of Oregon is a federally recognized Tribe that includes over 30 Tribes and bands from western Oregon, northern California, and southwest Washington. These include tribes of the Kalapuya, Molalla, Chasta, Umpqua, Shasta, Rogue River, Chinook, and Tillamook and the many diverse bands of these main tribes.

The General Allotment Act of 1887 was designed to transition tribal members into farmers. Under this act, the government divided the Grand Ronde Reservation into 270 allotments for individual tribal members, totaling slightly more than 33,000 acres. This act also allowed tribal allotment lands to go from federal trust status to private ownership after 25 years. This resulted in major portions of the Reservation being lost to non-Native ownership. Then, in 1901, U.S. Inspector James McLaughlin declared a 25,791-acre tract of the Grand Ronde Reservation “surplus” and the U.S. sold those “surplus” lands for $1.16 per acre.

The Grand Ronde Tribe’s federal recognition ended on August 13, 1954 when Congress passed the Western Oregon Termination Act. This legislation stripped the Tribe of its federal status and severed the trust relationship with the federal government. Between 1954 and 1983, Grand Ronde tribal members were a landless people in their own land. The termination policy robbed the Tribe of its social, economic and political fabric, leaving a scattered population and poverty.

In spite of this, Grand Ronde remained a community interconnected by families. Tribal leaders began working in the early 1970s to restore the Tribe’s federal status. They began the arduous task of reestablishing the Confederated Tribes of the Grand Ronde Community of Oregon. They raised money to lobby Congress, testified before lawmakers in Washington DC, and fought for the Tribe’s recognition. Their hard work and dedication were realized on November 22, 1983 when President Ronald Reagan signed the Grand Ronde Restoration Act (Public Law 98-165). Five years later the Tribe regained 9,811 acres of the original reservation when the Grand Ronde Reservation Act was signed on September 9, 1988. These lands lie just north of the community of Grand Ronde.

After restoration and the re-establishment of the Grand Ronde Reservation were completed, the Tribe focused on rebuilding its institutions and developing programs to meet the needs of its members.

The Tribe is active throughout its ancestral homelands but located in western Oregon where it has an 11,500-acre reservation in Yamhill County. With approximately 5,400 enrolled tribal members, the Tribe is governed by a nine-member Tribal Council that is elected by the Tribe’s voting membership. Since time immemorial tribal people have relied on these traditional landscapes for their livelihood. The fish and game were plentiful and what the lands didn’t provide, they acquired by trade.

This way of life changed with western expansion. Ratified and unratified treaties between the Tribes and the United States Government from 1853 through 1855 resulted in the forced removal of tribal members from their ancestral homelands. Despite this removal, tribal members maintained their connection to their homelands and areas such as Willamette Falls, Mary’s Peak, Cascadia Caves and Table Rocks and the many other historical sites throughout our ceded territories.

COPYRIGHT 2020 | MADE WITH ❤ BY DIGITAL VENTURE